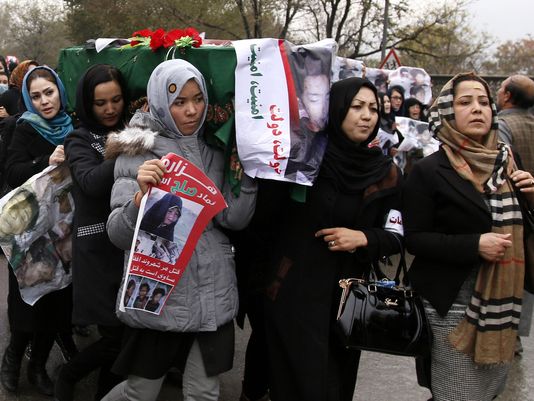 People hold one of the coffins of the Afghan civilians from Hazara minority, who were allegedly slain by Islamic State militants in Zabul.(Photo: JAWAD JALALI, EPA)

KABUL, Afghanistan – Thousands of people gathered outside the Presidential Palace in the center of the Afghan capital on Wednesday, holding aloft the coffins of seven ethnic Hazaras who had been kidnapped and beheaded, while calling for a new government that can ensure security in the country.

The protesters held banners and photos of the victims — who include a nine-year-old girl — as they chanted “Death to the Taliban,” ”Down with the Government” and “Death to Pakistan.”

They had walked around 10 kilometers (6 miles) through the rain, carrying the green-draped coffins of the four men, two women and child who were found with their heads nearly cut off on Saturday in the southeastern province of Zabul.

They had been kidnapped in neighboring Ghazni province up to six months earlier. Afghanistan’s spy agency dismissed Taliban claims that affiliates of the Islamic State group were behind the killings. In the past five days, rival Taliban groups have been fighting each other in the region where the bodies were found.

The bodies of the seven victims were brought 380 kilometers (240 miles) to Kabul from Zabul on Tuesday. Protesters held an overnight vigil before beginning their march early Wednesday.

President Ashraf Ghani sent a delegation to Ghazni to investigate the killings, his office said. A statement described the kidnappers as “mainly non-local terrorists.”

The United Nations Assistance Mission in Afghanistan condemned the killings and said they could constitute a war crime. Killing and kidnapping civilians are “serious violations of international humanitarian law,” UNAMA chief Nicholas Haysom said in a statement, calling for the perpetrators to be held accountable.

The protesters called on Ghani and Chief Executive Abdullah Abdullah to resign, and …read more