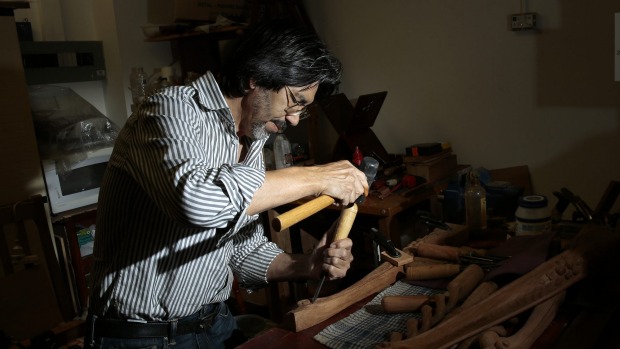 Afghan refugee and craftsman Hashmat Shafaq working on a table leg in his store Rosewood Furniture in Woden. He was a woodworker in Afghanistan before he came to Australia in 1999. Photo: Jeffrey Chan

Hashmat Shafaq has the Afghan Communist party to thank for his becoming an old world carpenter who uses ancient skills to craft exquisitely carved furniture at his Woden workshop.

The 58-year-old was born in Behsood, near Kabul, to a middle class family.

“My father was a shopkeeper,” he said. “We had the equivalent of a small community supermarket.

“I liked to study but when I was 13 or 14, the communists came. They wanted a secular state and targeted all Muslims, especially Hazara like us.”

Within a short time membership of the communist youth organisation had become almost mandatory and Shafaq realised no matter how hard he worked he would not get good marks unless he effectively renounced his faith.

“I told my father and he said, ‘forget school’, and took me to a woodworking factory owned by one of his friends,” he said.

Skills were taught in time-honoured ways with apprentices starting off on small jobs and then working up to bigger ones.

“You watched, you learnt and then you tried it yourself,” Shafaq said. “If it wasn’t good enough you were made to try again.”

Wood carving was a special skill.

“Woodcraft was not difficult for me; I learnt wood turning very quickly. One of my friends [in the factory] was a carver. I watched him and then I picked up …read more