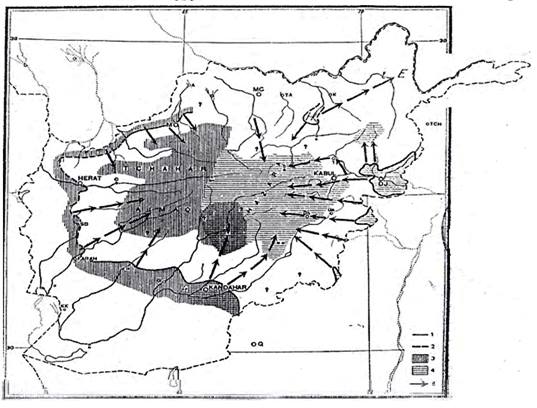 In 1892 the independent status of the Hazara was finally ended, for, after various revolts, they were crushed by the forces of Amir Abdur Rahman Khan which advanced on Hazarajat from all sides. All the Hazara leaders were captured and taken to Kabul, and “all anxiety and fear of rebellion is at an end, and the man is not to be found who could incite the people to rebellion, for he does not exist.” (Abdur Rahman Khan 1900, Vol. 1, p. 283).

Abdur Rahman Khan devotes a whole chapter in his memoirs to this war, writing that: “…. Afghan chiefs had applied several times to raise a force of country people at their own expense to fight against the Hazaras, whom they looked upon as enemies to their country and religion. I had not given them permission to do this heretofore, but not [spring 1892] I gave a general order that everybody would be allowed to go and help in the punishment of the rebels.” He continues: “Before the arrival of these volunteers the Hazaras were defeated from three directions …. Near Uruzgan.”(I.c, p.283).

In regard to the further consequences of this conquest, Amir Abdur Rahman Khan unfortunately writes nothing, but it is interesting to stress that he says that the volunteers played practically no role during the Hazara war, for if we examine the information I have collected by conversations with Afghan nomads. Particularly of the Ahmadzai, a quite different impression is formed of the part