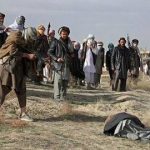 Data collected and published by human rights groups on the Taliban showed that their intolerance of dissidents are no different to their past and they have not changed.

When the United States (US) started talks with Taliban, there was a wave to change the image of the group. In this narrative, there was an attempt to show that the Taliban have changed since it collapsed in 2001. The aim was to shift the public opinion to accept the deal between the terrorist group and US government, which finally allowed the departure of the US and allies forces from …read more