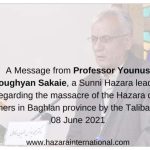 A Message from Prof. Younus Toughyan Sakaiea Sunni Hazara leader, regarding the massacre of the Hazara de-miners in Baghlan province by the Taliban on 08 June 2021

The genocide of the Hazara community continues. In 1998, when the Taliban invaded Northern Afghanistan, they arrested 27 Ismaili Hazara elders from the Nikpai Valley and shot them dead in an area named Robatak in Samangan Province. They did not allow the bodies to be buried. The bodies of the victims were eaten by wild animals and birds. After the fall of the Taliban in 2001, the people collected the remaining bones of …read more