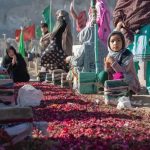 The 10 Hazara coalminers murdered by Isis were buried at Quetta’s Hazara Town cemetery. At least 1,000 Hazaras have been killed in sectarian violence in the past decade. Photograph: Mashal Baloch/The Guardian

Ahmed Shah had always dreamed of bigger things. Though just 17, the high school pupil had taken a job in the coalmines of Balochistan, Pakistan’s south-western province, one of the harshest, most dangerous working environments in the …read more