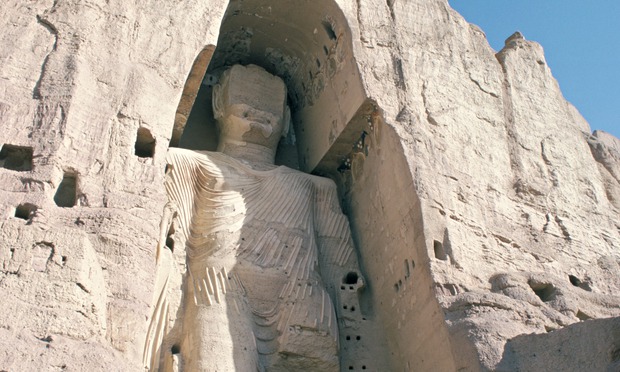 Plans are afoot to restore giant Buddhist symbols destroyed by the Taliban, but experts cannot agree on best way forward.

The Sasal Buddha at Bamiyan, Afghanistan, pictured before its destruction in 2001. Photograph: Ian Griffiths/Corbis

It is always a shock reaching Bamiyan, coming face to face with the two huge cavities in the cliff face. The upright tombs stare out over the valley, a splash of vegetation surrounded by wild mountains. The town straddles the Silk Road, close to the point where it used to enter Persia, dwarfed by two massive mountain ranges, the Koh-i-Baba and Hindu Kush. The void left by the two destroyed Buddha figures is appalling, it rouses an emotion almost more powerful than their once tranquil presence did for centuries.

To understand what happened you must go back to the beginning of 2001. The Taliban-led regime was on very poor terms with the international community and increasingly tempted by radical gestures. The decision to destroy the two monumental Buddha figures at Bamiyan was just part of the drive to destroy all the country’s pre-Islamic “icons”, an act of defiance to the outside world.

Demolition work at Bamiyan started at the beginning of March 2001 and lasted several weeks, the two figures – 58 and 38 metres tall – proved remarkably solid. Anti-aircraft guns had little effect, so the engineers placed anti-tank mines between their feet, then bored holes into their heads and packed them with dynamite. The world watched this symbolic violence in impotent horror.

Now almost 14 years on, reconstruction work has yet to start as archaeologists and Unesco policy-makers argue.

The two cavities resemble open wounds, a blemish on the long history of Afghanistan, which experienced the fervour of Buddhism long before the arrival of Islam. For 15 centuries …read more